You’ve probably already read a blog or two about the DFW Writers’ Workshop, but I hope you’ll bear with me while I add my two cents worth. The conference started last Saturday morning, but the fun started Friday.

I’d been in touch with two friends I met at last year’s conference, Jess Witkins and Julie Glover, and I went to Italiano’s to meet them. They’d had lunch there and forgotten to get up and leave.

When I got there, my old friend Kristen Lamb was with them, along with a brand-new friend, Rachel Funk Heller. I’d seen Rachel on Twitter many times, but had never met her. She turned out to be a barrel of fun.

Friday evening, Kristen wanted everybody to experience Angelo’s, a legendary barbeque restaurant in west Fort Worth, about 100 miles from the conference. Okay, that’s an exaggeration, but there was plenty of rush hour traffic on the way.

In honor of the occasion, Ingrid Schaffenburg and Donna Newton and Julie Glover wore their western boots, as you can see in the photo above. I think Donna’s the first English cowgirl I’ve come across, but hey, after all, we were in Cowtown.

You can tell from Kristen Lamb’s and Julie Glover’s serious demeanors that we were all business and not there to have fun. You can’t really see the shirts all that well, but they both wore superhero shirts. Well, they’re super writers, why not?

Rachel Funk Heller, Ingrid Schaffenburg and Kristen mugged for this photo at our table at Angelo’s. Rachel flew in all the way from Hawaii, so you guys who live in Denver and Cheyenne and Rochester and Toronto and such places have no excuse for not coming next year.

Julie and Jess Witkins went over to play with a bear—one of several products of the art of taxidermy displayed around the restaurant. The bear was a little bigger than they were, but he seemed to enjoy their cuddling. I’m not sure what they all did after Angelo’s. I went home from there, and they presumably returned to their hotels. 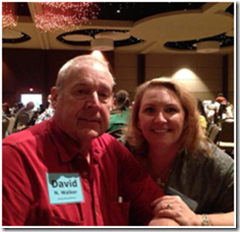 Saturday night, I got to meet Tameri Etherton. She and I have become pretty good cyber friends, and it was great to meet her in person.

Saturday night, Gloria Richard—for some reason I don’t have a photo of her—brought a book that excited all the girls at my table—IYKWIM! Maybe the print on the title is small enough not to embarrass my readers, although the girls were having too much fun to be embarrassed. 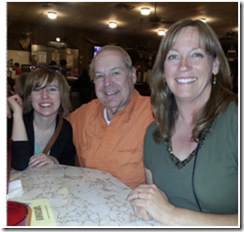 Not sure whether this was lunch Sunday or at the Gong Show, which is the closing event of the conference, but there I am with two of my favorite peeps, Jess Witkins and Piper Bayard. Good company to keep.

By the way, Piper conducted the last—and in my opinion, best—workshop I attended. She talked about social media, and although I’ve been on Facebook and Twitter for several years and am coming up on my 300th blog post, she tossed out a couple of pearls I wish I’d known sometime back. I think this was Piper’s first time as a presenter at a writers’ conference, but she was great. Kudos, Piper.

One of the things Piper discussed prompts me to offer an apology to my Tweeps and FB friends and blog subscribers. I was introduced to Hootsuite a couple of years ago as an easy way to schedule announcements on Twitter and Facebook in advance with links to blogs as I posted them. Someone told me I should schedule several announcements the day of the post and several more the next day.

Piper pointed out that this is pretty much equivalent to spamming. From now on I will make one real-time announcement on Twitter and one on Facebook for each blog I post. If I’ve been spamming you, I apologize. It was unintentional.

Another lady I picked up some valuable info from was Birdy Jones. She taught a couple of different sessions on self-publishing, and, although I’ve done that six times so far, I picked up a couple of things from her i needed to know.

David N. Walker is a Christian husband, father and grandfather, a grounded pilot and a near-scratch golfer who had to give up the game because of shoulder problems. A graduate of Duke University, he spent 42 years in the health insurance industry, during which time he traveled much of the United States. He started writing about 20 years ago and has been a member and leader in several writers' groups. Christianity 101: The Simplified Christian Life, the devotional Heaven Sent and the novella series, Fancy, are now available in paperback and in Kindle and Nook formats, as well as through Smashwords and Kobo. See information about both of these by clicking "Books" above.
View all posts by David N. Walker →
This entry was posted in Freestyle Friday and tagged Advice, Authorship, Birdy Jones, David N. Walker Christian Author, David N. Walker Historical Fiction Author, DFW Writers Workshop, Donna Newton, Fancy Series, Heaven Sent, Ingrid Schaffenburg, Jenny Hansen, Jess Witkins, Julie Glover, Kristen Lamb, Life, Life experience, Life lessons, Life truths, Life values, Personal development, Piper Bayard, Rachel Funk Heller, Self-help. Bookmark the permalink.