A few days ago, someone posted a message on Facebook about how horrible it would be to arrive in the United States and find yourself detained and then sent back to the country where you came from. I’m not quoting the post verbatim, but that’s the jist of it.

I replied that that wouldn’t be nearly as horrible as finding yourself falling from a high floor in a building that had just been hit be an airplane commandeered by terrorists. That’s not a verbatim quote, either, but it does state my point. I expected my reply to be ignored, but it wasn’t.

The stream of hate that came from the left, vilifying me for wanting to protect my country, was amazing. I was shocked and totally unprepared for it. I would have kept my opinion to myself if I’d had any idea of the barrage of hateful comments it would elicit. Usually, when some leftist comments on a post from me or one of my patriotic friends, the comment is either ignored or possible addressed in a respectful manner and then dropped rather than just leading into one nasty reply after another.

It’s difficult for me to imagine why anyone would oppose the President’s attempts to protect the nation he was sworn to protect. For me, the quote below from Cloyd Rivers is a very apt analogy. 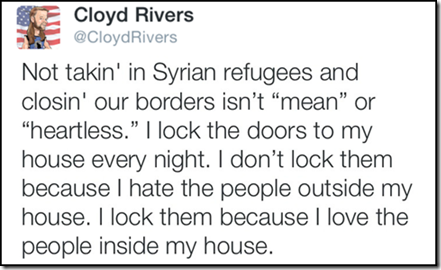 Should I be attacked as a hatemonger for locking the doors of my house before going to bed at night? Almost anyone would agree I’d be a fool not to. I would be derelict not to try to protect my family from anyone who might try to enter and do us harm. Why then should our President not “lock the doors” by doing whatever he needs to do to keep out those who would enter and do our nation harm?

The left screams that not all Muslims are terrorists. That’s true. On the other hand, the 9-11 attacks, the attacks a year or so ago in Paris and other European cities, the US embassy bombing in Beirut in 1983, countless bombing of Israeli targets, the Boston Marathon bombings, the Benghazi bombing, and many more too numerous to list, were all carried out by Muslims.

If some of the people we exclude prove not to be terrorists, we can apologize to them later, but our first duty—the President’s first duty—is to stop the entry of terrorists into our country, just as it’s the homeowner’s first duty to protect his family and property by locking the doors at night.

How do you feel about the easy access to our nation we have allowed terrorists?

David N. Walker is a Christian husband, father and grandfather, a grounded pilot and a near-scratch golfer who had to give up the game because of shoulder problems. A graduate of Duke University, he spent 42 years in the health insurance industry, during which time he traveled much of the United States. He started writing about 20 years ago and has been a member and leader in several writers' groups. Christianity 101: The Simplified Christian Life, the devotional Heaven Sent and the novella series, Fancy, are now available in paperback and in Kindle and Nook formats, as well as through Smashwords and Kobo. See information about both of these by clicking "Books" above.
View all posts by David N. Walker →
This entry was posted in Uncategorized and tagged Advice, Authorship, Caring, David N. Walker Christian Author, David N. Walker Historical Fiction Author, Fancy Series, friends, Heaven Sent, immigration, Life, Life experience, Life lessons, Life truths, Life values, People, Personal development, Self-help, Terrorists. Bookmark the permalink.

9 Responses to Protecting Ourselves