With all the controversy about the bill passed in Indiana defending the freedom of religion, I posted the following picture on Facebook the other day: 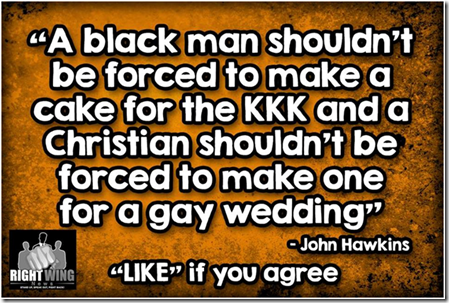 I posted it for the benefit of my Christian friends. I couldn’t imagine that it would stir up a controversy. It’s such an apt analogy, I anticipated no serious disagreement.

One of my dear friends offered a very polite disagreement, which surprised me a little, but her politeness kept it from being offensive. Then several other people jumped on and made heated derogatory remarks about it. These haters pretty much took over the post. I thought about deleting the whole thing, but I decided to let it stay.

Several people thought it would be horrible for a black man to be forced to aid the KKK but that it was fine for Christians to be coerced to aid homosexual couples. (Why do we call them gay? I’ve never understood that.) In other words, these people were saying persecution is okay as long as it affects your group and not ours.

Would someone please explain to me why a Christian should be forced to cater a wedding of two people who flaunt their sins in the face of God and man? I realize that Christians sin, too, but we don’t flaunt our sins and tell God that He’s wrong and we’re right to sin. I don’t understand how anyone can defend such behavior.

In the second chapter of Genesis, God says it’s not good for man to be alone, so He took one of Adam’s ribs and fashioned it into a woman. Not another man—a woman. And God said in verse 24:

For this reason a man shall leave his father and his mother, and be joined to his wife; and they shall become one flesh.

Marriage—one man and one woman. That was God’s design. In the first chapter of Romans, Paul speaks very directly and specifically to the sin of homosexuality:

26. For this reason God gave them over to degrading passions; for their women exchanged the natural function for that which is unnatural,

27.  and in the same way also the men abandoned the natural function of the woman and burned in their desire toward one another, men with men committing indecent acts and receiving in their own persons the due penalty of their error.

God is very clear on this, and yet much of our society says there’s nothing wrong with it. We fail to recognize the warning in Isaiah 5:20:

Woe unto them that call evil good, and good evil. . .

Our society today says those who overtly sin and shake their fists in God’s face are good but Christians who seek to uphold God’s word are evil. We think that if we can gather a majority, or even a large enough minority, we can override God’s word and substitute our own wisdom, but it doesn’t work that way. In the first few verses of 2 Timothy 3, Paul says:

But realize this, that in the last days difficult times will come. For men will be lovers of self, lovers of money. . .without self-control, brutal, haters of good. . .lovers of pleasure rather than lovers of God, holding to a form of godliness, although they have denied its power.

Does this mean God hates homosexuals? Emphatically not. Nor do I and other Christians who hate homosexuality. Like God, we hate the sin, not the sinner. My own brother was a practicing homosexual most if not all his adult life. I always loved him, but I could not condone his sin. I don’t condone my own sins. The difference is that rather than trying to tell God my behavior is okay, I confess it to Him as sin.

The sign I posted on Facebook says nothing about hating homosexuals. It says we shouldn’t be forced into the position of condoning their homosexual lifestyles. For the life of me, I can’t see how forcing a Christian to do that is okay.

What are your thoughts on this subject? Feel free to disagree with me—briefly and politely—but please don’t post a long rant. I will remove it if you do.

David N. Walker is a Christian husband, father and grandfather, a grounded pilot and a near-scratch golfer who had to give up the game because of shoulder problems. A graduate of Duke University, he spent 42 years in the health insurance industry, during which time he traveled much of the United States. He started writing about 20 years ago and has been a member and leader in several writers' groups. Christianity 101: The Simplified Christian Life, the devotional Heaven Sent and the novella series, Fancy, are now available in paperback and in Kindle and Nook formats, as well as through Smashwords and Kobo. See information about both of these by clicking "Books" above.
View all posts by David N. Walker →
This entry was posted in Christian Thoughts and tagged Adam, Bible, Christian, Christian Fellowship, Christianity, David N. Walker Christian Author, David N. Walker Historical Fiction Author, Faith, Fancy Series, Forgiveness, God is in control, Godly Wisdom, Grace, Heaven Sent, Homosexuality, inspiration, Jesus, Paul, Sins, Works. Bookmark the permalink.

8 Responses to Freedom of Religion