For years there’s been talk in our area of building “bullet trains”—trains that run in excess of 200 miles per hour. Talk centers around three different routes: Downtown Fort Worth to Downtown Dallas, Dallas to Houston, and the I-35 corridor from Fort Worth to Austin and San Antonio. 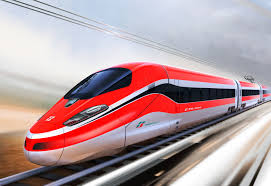 Some of the talk involves private financing with the revenues from passengers paying the cost of building and operations. Others talk of taxpayer financing, with a heavy contribution sought from our bankrupt federal government.

A Fort Worth Star-Telegram article put the cost of the Fort Worth-Dallas line at $4.4 billion and the Dallas-Houston line at $10 billion. No estimates were given for the I-35 corridor train.

Surprisingly, private financing appears to be a real possibility for the Dallas-Houston route, but the Fort Worth-Dallas route, costing less than half as much and in all likelihood producing much more traffic, seems to hinge on federal grants and local taxpayers.

This makes no sense to me. If a $10 billion project can line up private financing, why can a $4.4 billion project which would draw much more revenue per mile do the same?

An even more basic question in my mind is why would we build something that there’s not enough demand to pay for? Whether it’s mass transit, Amtrak or whatever—if enough people are willing to pay to use it for it to be self-supporting, then go for it. On the other hand, if demand is insufficient to carry the load, why should a bunch of already overloaded taxpayers shell out the money for it?

Lest I be misunderstood, let me hasten to say that I love railroads. I grew up in an era in which passenger trains were THE mode of transportation, and I started riding trains to visit kinfolk before I started to school. I miss the days of passenger train service and wish we still had it. But I also understand the railroads suffered financial losses providing the service, and I don’t blame them for dropping it.

As much as I’d love to get on a train and be in San Antonio in less than two hours, avoiding the parking lot they call I-35, I don’t believe in boondoggles at taxpayer expense. Build the lines if projected revenue makes sense to private financing sources, but don’t blow taxpayers’ money on uneconomical ventures.

What do you think about taxing our citizens to pay for ventures that are not economically feasible? Why do you think so?

David N. Walker is a Christian husband, father and grandfather, a grounded pilot and a near-scratch golfer who had to give up the game because of shoulder problems. A graduate of Duke University, he spent 42 years in the health insurance industry, during which time he traveled much of the United States. He started writing about 20 years ago and has been a member and leader in several writers' groups. Christianity 101: The Simplified Christian Life, the devotional Heaven Sent and the novella series, Fancy, are now available in paperback and in Kindle and Nook formats, as well as through Smashwords and Kobo. See information about both of these by clicking "Books" above.
View all posts by David N. Walker →
This entry was posted in Uncategorized and tagged Advice, Authorship, Bullet trains, Caring, David N. Walker Christian Author, David N. Walker Historical Fiction Author, Fancy Series, friends, Heaven Sent, Life, Life experience, Life lessons, Life truths, Life values, People, Personal development, Railroads, Self-help. Bookmark the permalink.