Whew! I know, writers aren’t supposed to use exclamation points, but . . . Whew!

After twenty years of writing and rewriting different versions of the same story, I decided a little over a year ago to stop trying to make it into a novel and break it into a series of novellas instead. The result is a seven-novella series called Fancy.

For those of you unfamiliar with the story, Fancy is a fourteen year-old girl when her father is drafted into the Confederate Army. Since her mother died giving birth to her little sister, Fancy is left to take care of four year-old Danni, run the house and operate the farm.

Fancy Vol 1 starts there and follows her as an unscrupulous neighbor manages to steal the farm, an old friend of her father’s becomes her mentor, her deranged pastor kidnaps her, and just as she and her mentor are ready to leave Florence, Alabama, and move to Louisville, Kentucky, a couple robbing the local bank inadvertently kidnaps her sister as they steal her buggy for their getaway. 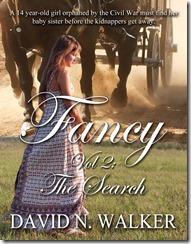 Fancy Vol 2: The Search follows Fancy and Phyllis, her mentor, as they try to find Danni and the kidnappers. They finally find the male kidnapper dead in a hotel room after his companion kills him, but no Danni. Fancy chases the other kidnapper, Priscilla Mayfair, finally catching her only to see her fall overboard into the paddlewheel of the riverboat they were on, presumably killing herself. Still, no Danni.

Fancy Vol 3: Louisville starts as Fancy gives up after spending six months searching for her sister. She goes to Louisville, where Phyllis has purchased a saloon in both of their names. While learning the saloon business from Phyllis, Fancy meets their banker, Bob Gentry, who is immediately taken with her. Priscilla Mayfair, her face horribly disfigured by the fall into the paddlewheel, happens into Louisville and sees Fancy, whom she has sworn to kill for revenge.

Fancy Vol 4: Following the Rails begins at Omaha, where Bob Gentry has moved to open a new bank. Fancy is there to put together a mobile saloon to follow the rails as the Union Pacific Railroad is built. When a rival tries to burn down her establishment, she turns the tables on him and drives him away. As the railroad grows across Utah and nears it’s completion, Fancy sells her saloon to employees who want to take it to another railroad. About that time, the man she drove away earlier finds and kidnaps her.

Fancy Vol 5: Thomas P. Greene starts as her father, erroneously reported dead near the beginning of the war, gets out of the Union prison where he was being held throughout the war. Penniless and in poor health, he begins the slow trek back to his home outside of Florence, Alabama, only to discover his neighbor’s treachery. Knowing Tom can refute the false papers that allowed him the take the farm, the neighbor tries to kill him. Tom manages to escape, although he is injured. The neighbor skips the country to avoid being arrested, and Tom is awarded not only his own farm but all the neighbor’s property as well.

When the neighbor comes across a newspaper article about Fancy disclosing her location, he sends it anonymously to Tom to lure him there so he can kill him. He follows Tom into the same woods where Fancy’s captor has taken her. 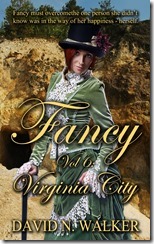 Fancy Vol 6: Virginia City follows Fancy as she goes there to buy a saloon and build a hotel and restaurant. Her father joins her after returning to Alabama to wind up his affairs there. Fancy talks her friend Bob Gentry into selling his interest in the Omaha bank and joining her in opening one in Virginia City. Although she has known for years that Gentry loved her, she has never thought of him as anything but a friend until one day it dawns on her that she not only loves him but has for some time. They plan a quick wedding, but unknown to them, the brother of the pastor who was hanged for kidnapping her in Vol 1 shows up at her wedding after several years of searching for her to avenge his brother’s death.

Fancy Vol 7: The Final Chapter begins with Fancy’s and Bob’s honeymoon and follows them as they settle in the small village of Seattle, Washington. He opens a bank, and she builds a hotel, and they have a baby.

Meanwhile, Will Potter, who, along with his late wife Bess, adopted Danni when she wandered into the yard of their remote cabin in the Smoky Mountains, is dying. He tells Danni for the first time that she was adopted and that she probably has family she doesn’t know about. He encourages her to head west when he dies, which she does.

Before she gets very far, a mountain man who has had his eye on her for a long time kidnaps her and takes her to the remote cabin he shares with his brother, intending to make her their slave. She manages to shoot both of them with a hidden pistol, killing the brother and wounding her kidnapper. She escapes, but when he recuperates he sets out to find and kill her.

Fancy and Bob decide to take their daughter Phyllis and their maid Hera back east to see Bob’s sisters. During a stop in San Francisco, Priscilla Mayfair turns up and sees Fancy. In an attempt to kill her, she burns the hotel where Fancy and her family are staying. Priscilla’s latest protégé, outraged at this, kills her and leaves her body in an alley.

After twenty years of development and fifteen months of writing the novellas, can you allow me an exclamation point on my whews? I hope so. I’m finally able to announce the release of Fancy Vol 7: The Final Chapter on Tuesday, September 17, which happens to be my wife’s 70th birthday. It will be available in e-versions on Amazon.com, Barnes&Noble.com, Smashwords and Kobo, and in paperback on CreateSpace.

If you haven’t read any of these, Fancy Vol 1 is free on Smashwords and soon will be on Amazon. Try it and then buy the rest of the series. If you enjoy historical fiction—particularly the Civil War era, westerns, stories about strong women, or just good clean G-rated fiction, you should enjoy this series.

For more information about David N. Walker, click the "About" tab above.

For more information about his books, click on "Books" above.

David N. Walker is a Christian husband, father and grandfather, a grounded pilot and a near-scratch golfer who had to give up the game because of shoulder problems. A graduate of Duke University, he spent 42 years in the health insurance industry, during which time he traveled much of the United States. He started writing about 20 years ago and has been a member and leader in several writers' groups. Christianity 101: The Simplified Christian Life, the devotional Heaven Sent and the novella series, Fancy, are now available in paperback and in Kindle and Nook formats, as well as through Smashwords and Kobo. See information about both of these by clicking "Books" above.
View all posts by David N. Walker →
This entry was posted in Uncategorized and tagged Advice, Authorship, Caring, David N. Walker Christian Author, David N. Walker Historical Fiction Author, Fancy, Fancy Series, friends, Heaven Sent, Historical Fiction, Life, Life experience, Life lessons, Life truths, Life values, People, Personal development, Self-help, Strong Women, The Civil War, Westerns, Women's Fiction. Bookmark the permalink.