Ronit Baras wrote an article in Family Matters in September of 2011 which started with the following image: 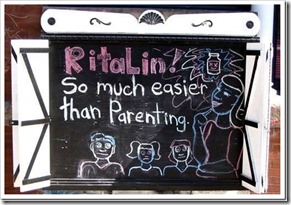 The basic thesis of her article was that Ritalin was a cop-out to replace real parenting. She’s swimming against the current in this. Diagnosing kids as having ADHD and then prescribing them Ritalin has become as normal as taking aspirin to get rid of a headache. But is it right?

A little over twenty years ago, I took custody and responsibility for raising by high school-age nephew. He was a poor student and paid little attention in class. My own daughter was grown and had never presented me with a situation like I faced with him. I didn’t know what to do, but I was surrounded by people with the quick diagnosis of ADHD who urged me to get him on Ritalin. Not knowing any better, I acceded to their suggestions. And I’ve been sorry ever since.

Despite everything, my nephew grew up to be a productive member of society. I take little credit for that. I think he has succeeded in spite of, rather than because of, his raising.

Through the years since then, I have become more and more convinced that we have made up the diagnosis of ADHD to avoid parenting. Kids have trouble paying attention in class. Is that new? When I was in school, kids had trouble paying attention in class. There was a solution available back then that didn’t involve subjecting the kids to addictive drugs—a paddle hanging on the wall of the boiler room. Very effective.

In our enlightened society today, we don’t want our poor little kids to suffer the indignity and temporary pain of a paddling. We’d rather subject them to the possibility of addiction to dangerous drugs.

That same article quotes the Citizen’s Commission on Human Rights as saying, “Emergency room visits by kids aged 10 to 14 involving Ritalin intoxication or overdoses have now reached the same level of those visiting for use of cocaine.”

Okay, David, so how does this rant relate to Christianity, which is the subject of our Tuesday blogs? Very simply. Hebrews 12:5-8 says:

. . . you have forgotten the exhortation which is addressed to you as sons, “My son, do not regard lightly the discipline of the Lord, Nor faint when you are reproved by Him; For those whom the Lord loves He disciplines, And He scourges every son whom He receives.” It is for discipline that you endure; God deals with you as with sons; for what son is there whom his father does not discipline? But if you are without discipline, of which all have become partakers, then you are illegitimate children and not sons.

If we are going to parent our children, we must accept our responsibility to give them discipline. We can’t just leave them to do whatever they want without expecting consequences. We can’t leave them to develop bad behavior and then expect some medication to straighten them up for us. God says if we don’t discipline our children we treat them as illegitimate.

Isn’t it time to replace Ritalin with honest parenting?

What experiences have you had with ADHD and Ritalin? Have you tried letting your child know what behavior is expected and what the consequences are of not meeting that behavior standard?

David N. Walker is a Christian husband, father and grandfather, a grounded pilot and a near-scratch golfer who had to give up the game because of shoulder problems. A graduate of Duke University, he spent 42 years in the health insurance industry, during which time he traveled much of the United States. He started writing about 20 years ago and has been a member and leader in several writers' groups. Christianity 101: The Simplified Christian Life, the devotional Heaven Sent and the novella series, Fancy, are now available in paperback and in Kindle and Nook formats, as well as through Smashwords and Kobo. See information about both of these by clicking "Books" above.
View all posts by David N. Walker →
This entry was posted in Terrific Tuesday and tagged ADHD, Christian, David N. Walker Christian Author, David N. Walker Historical Fiction Author, Fancy Series, God is in control, Godly Wisdom, Heaven Sent, inspiration, Ritalin, Ronit Baras. Bookmark the permalink.

15 Responses to ADHD And Ritalin