Tomorrow marks the eleventh anniversary of the heinous attacks against the World Trade Center and the Pentagon and the thwarted fourth attack that ended up in a field in Pennsylvania. Let’s all stop to remind ourselves how fleeting our freedom is and how easily it is attacked by the destructive forces of Satan’s armies of evil. 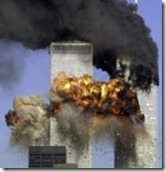 Let’s all honor the memories of those killed on that horrible day by lifting up their families in prayer. Let us also pray that nothing like this is allowed to happen again.

Sometimes I hear people say that as Christians we should forgive and forget. We should not condemn these terrible, cowardly acts but should put them in the past and move on.

Yes, we should forgive any sinner who confesses and repents of his sins. No matter what those sins might be. However, even God doesn’t promise to forgive those who neither confess nor repent of their sins. See my post on 1 John 1:8 & 9 for more on this subject.

Since none of the perpetrators behind this atrocity have been even the least bit repentant, I see nothing in God’s word that says we should forgive them. The same goes with this army major at Fort Hood who massacred all those people. These jihadists claim to be acting in behalf of the god Mohammed told them to worship, and they see no reason to repent. As long as that’s true, I see no reason to forgive.

Even if we do presume a Christian obligation to forgive, that obligation would be from individual Christians to individual sinners. As a nation—and as citizens thereof—we have no such obligation. In fact, we have an obligation to hold suicide bombers who survive their missions, saboteurs, mass murderers and other who commit atrocities against our nation accountable for their actions.

We also have an obligation to try to protect our nation and its citizens from future attacks by such people. If we have to use mild forms of torture such as waterboarding in order to gain the intelligence needed for that protection, I think we have both the right and the duty to do so.

What do you think about our rights and responsibilities with regard to defending our nation? Let us know.

Have a New Testament passage or concept you’d like to see discussed here? Maybe something you’ve never quite understood. I’d love to hear from you about that, too. I’ll try my best to explain it.

David N. Walker is a Christian husband, father and grandfather, a grounded pilot and a near-scratch golfer who had to give up the game because of shoulder problems. A graduate of Duke University, he spent 42 years in the health insurance industry, during which time he traveled much of the United States. He started writing about 20 years ago and has been a member and leader in several writers' groups. Christianity 101: The Simplified Christian Life, the devotional Heaven Sent and the novella series, Fancy, are now available in paperback and in Kindle and Nook formats, as well as through Smashwords and Kobo. See information about both of these by clicking "Books" above.
View all posts by David N. Walker →
This entry was posted in Archives and tagged 911 attacks, Christian, David N. Walker author, forgive and forget, Godly Wisdom, inspiration, Twin Towers 911. Bookmark the permalink.