My wife and I left toward the end of June for a two-week road trip. I thought I’d share a few highlights (or lowlights) with you.

Somehow, we got from Fort Worth to Blackwell, Oklahoma, our first leg, without any construction delays. Don’t know how that happened.

Our second day, we drove to Platte City, Missouri, just north of KCI Airport, to visit my nephew and his wife. Entering the Kansas City area from the southwest, we had an opportunity to make up for the lack of construction delay. We moved about two miles in maybe thirty minutes at one point near the interchange of I-35 and I-435. Lots of fun.

After years of resisting the idea of buying a smart phone—because I knew it would be smarter than I am—I finally bought one in anticipation of this trip. I got an Android so I could have the built-in Google GPS. I have no problem finding my way across country. I know approximately where all the two-digit interstate routes go, as well as many US highways, but the GPS is handy for getting to a specific address. And fun to play with.

On our first day, I learned that the GPS sucks battery juice like a camel sucks up water. No problem. The adapter cord has a removable USB terminal, and my Sirius radio has a built-in USB port. I’d just plug into that to keep the phone charged. The only problem with that was that for some reason the USB connection did not work to charge the phone, so I arrived in Kansas City with almost no juice. I managed to limp to my nephew’s house on the dregs of the juice, but I decided to buy an adapter to plug into the cigarette lighter for the rest of the trip.

When we left Platte City to continue our trip, a symbol lit up on the dash saying I had a low tire. Fortunately, when I refilled it, it held the air for the rest of the trip.

We had a long drive that day from Platte City to La Crosse, Wisconsin, where I’d arranged to meet with the fabulous Jess Witkins and her significant other, Joe. When we finally got to La Crosse—an hour or so later than planned, due to 794 construction projects along the way—the GPS decided it would be fun to send us around in circles instead of finding our motel. We finally had to stop and ask for directions. Oops, men don’t admit that. 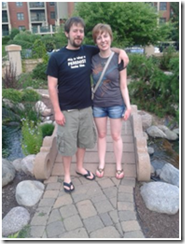 We finally got to meet with Jess and Joe and spend a couple of hours with them. They showed us some lovely gardens down on the bank of the Mississippi.

The next day I was excited about getting to Harbor Springs, Michigan, where we would spend several days with friends. We enjoy these friends, but I also looked forward to the weather there. When it’s 100 degrees in Texas, it’s usually in the 70s there.

Oops! Sharon and I have this uncanny ability to take heat waves with us. We once took one to the Yukon Territory and even over into Alaska. Northern Michigan had daily highs in the mid-to-upper nineties the whole time we were there. Ugh!

We always go to Mackinac Island and to the Soo Locks at Sault Ste Marie while we’re there, and this was no exception. This photo shows our whole group in front of the Grand Hotel on Mackinac Island. I stuck a pillow under my shirt so I wouldn’t look too pretty for the rest of them. 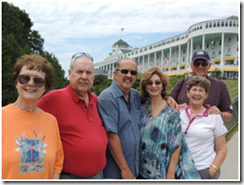 The day we left Michigan, our car air conditioner decided to play games with us. It blew out a weak stream semi-cool air all day. As it happened, the Cincinnati area had the hottest day on record that day. As we crossed the Ohio River the temperature registered as 110 degrees. Whew!

Next day, we drove from Lexington, Kentucky, to the Atlanta area to visit cousins in Peachtree City. For some reason, the air conditioner behaved that day.

After a good visit with the cousins, we headed for Monroe, Louisiana, on our way home. For some reason, the air conditioner misbehaved again that day but behaved the next day as we drove back to the house. Go figure.

I thought from the construction on the way to La Crosse and again the next day on the way to Michigan there couldn’t possibly be any equipment left for construction in other states, but we managed to find a good bit more—including one stop-and-inch-forward situation that took a good hour to get through. I remember when I was a kid my dad used to say, “We’re not tourists. We’re detourists.” Apparently that’s a genetic thing I inherited from him.

Oh, well, all in all, it was a great vacation, despite the heat and construction delays. I’m already read for our next vacation.

What sort of dampening experiences have you had on vacations? I always love to hear from you.

David N. Walker is a Christian husband, father and grandfather, a grounded pilot and a near-scratch golfer who had to give up the game because of shoulder problems. A graduate of Duke University, he spent 42 years in the health insurance industry, during which time he traveled much of the United States. He started writing about 20 years ago and has been a member and leader in several writers' groups. Christianity 101: The Simplified Christian Life, the devotional Heaven Sent and the novella series, Fancy, are now available in paperback and in Kindle and Nook formats, as well as through Smashwords and Kobo. See information about both of these by clicking "Books" above.
View all posts by David N. Walker →
This entry was posted in Archives and tagged David N. Walker author, Grand Hotel Mackinac, Mackinac Island, Sault Ste Marie. Bookmark the permalink.