Recently, I came across this statement in something I was reading. “While sitting down outside on our deck for a late supper, the wind kicked up.”

Pardon me? Was the wind actually sitting down outside on the deck? I doubt that was the author’s intention, but that’s what the statement means. What we’re dealing with here is called a dangling participle.

Since there is no subject in this participle phrase, we don’t know who was sitting down, so we must assume the subject is the first noun we come to: wind.

Sound like much ado about nothing? Like we’re picking at hairs? Maybe from this particular example it does, so let’s take another one. My dad used to toss this example of a dangling participle at us all the time when we were growing up.

“Having eaten our lunch, the train left.” 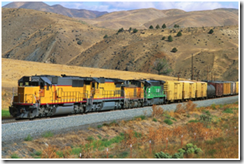 Really? Do you believe this train really ate our lunch before it left? Of course not, but since who ate our lunch is not specified in the statement, again, the phrase must pertain to the first noun we come to—the train.

Actually, this example differs a bit from the first one, because it contains both a present participle (having) and a past participle (eaten). The principle still applies, though.

If we want to eliminate confusion about who sat on the porch or who ate the lunch, we need to restructure our sentences a bit. We might say “While we sat down on the porch. . .” or “After we finished our lunch. . .” This eliminates any doubt or question about who did what in these two sentences.

I know—the reason you slept through grammar classes was that it was boring, and now here I am picking at nits. But it’s really more than just nit-picking. There are still readers out there who didn’t sleep through all their grammar classes, and when they see sentences like the examples cited above, it makes them wonder about our literacy as writers. Most people think we’re weird enough anyhow. Let’s not give them reason to doubt our ability to use the language.

David N. Walker is a Christian husband, father and grandfather, a grounded pilot and a near-scratch golfer who had to give up the game because of shoulder problems. A graduate of Duke University, he spent 42 years in the health insurance industry, during which time he traveled much of the United States. He started writing about 20 years ago and has been a member and leader in several writers' groups. Christianity 101: The Simplified Christian Life, the devotional Heaven Sent and the novella series, Fancy, are now available in paperback and in Kindle and Nook formats, as well as through Smashwords and Kobo. See information about both of these by clicking "Books" above.
View all posts by David N. Walker →
This entry was posted in Archives and tagged dangling participle, David N. Walker author, grammar tips, part of speech tips, writing tips. Bookmark the permalink.