Today, we at Life List Club start a new format. Every Wednesday and Friday one of our members will post a blog on the LLC Website. Today, our newest member, Sherry Isaac, who claims to have been raised by Nancy Drew and Miss Marple, will be the first to post on our new site. After you read this post, be sure to come back up here and click on the LLC Website so you can read hers also.

People say us old farts codgers are too resistant to change. Not me. I’ve got nothing against change—I just want everything to be the way it’s always been.

Those of you who have been following my blog for a while may recall a post I wrote some months ago about the lady who gave me my pedicures. I know, someone convinced most of us men that pedicures are only for women, but the first time I got one, about a year ago, I decided I didn’t give a sh care what people thought about it.

Maybe I have more reason for that than most men. As I’ve aged, my legs have apparently grown longer and my arms shorter. At least that’s the only reason I can think of for why it’s so difficult to reach my toes. 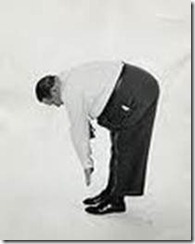 Actually, the guy in the picture has even more of a problem than I do, but you get the idea. It’s easier to let a pedicurist do the job. And that’s only part of the deal. It feels SO GOOD!

Ever since that first one, I’ve been going back to Wal-Mart every six weeks to two months to get Kim to do mine. Until a couple of weeks ago when I went in and discovered she no longer worked there. I had tried each of the other ladies in that shop when Kim was unavailable, but I didn’t like the jobs they did, so I didn’t make an appointment.

Finally, I got out the Yellow Pages Monday and made an appointment at the nearest place I could find. I’ve never liked the Yellow Pages, because they mean trying something unknown. I know, that brings my sanity into question, but I might as well be honest. Myndi Shafer claims to be one stray sock away from insanity. Maybe I’m closer than that. Anyhow, this time I would take pot luck and hope.

Now and then, they say, a blind hog finds an acorn. (Actually, I thought acorns were for squirrels, but that’s what “they” say.) Well, I got lucky and found an acorn Tuesday morning. I had come to love the way Kim did my pedicures so much, I was actually dreading the process of trying to find a replacement, so this came as quite a relief to me. I think my new pedicurist Tammy is going to work out fine.

What minor things are BIG DEALS to you?

Does giving up something you know you like and trying something unknown bother you?

Please leave a comment. I love to see them.

David N. Walker is a Christian father and grandfather, a grounded pilot and a near-scratch golfer who had to give up the game because of shoulder problems. A graduate of Duke University, he spent 42 years as a health insurance agent. Most of that career was spent in Texas, but for a few years he traveled many other states. He started writing about 20 years ago, and has six unpublished novels to use as primers on how NOT to write fiction. He is currently putting the finishing touches on his non-fiction Web Wisdom: Inspiration from the Inbox and starting his new fiction work—a series of novellas set during the period from 1860 to 1880.

David N. Walker is a Christian husband, father and grandfather, a grounded pilot and a near-scratch golfer who had to give up the game because of shoulder problems. A graduate of Duke University, he spent 42 years in the health insurance industry, during which time he traveled much of the United States. He started writing about 20 years ago and has been a member and leader in several writers' groups. Christianity 101: The Simplified Christian Life, the devotional Heaven Sent and the novella series, Fancy, are now available in paperback and in Kindle and Nook formats, as well as through Smashwords and Kobo. See information about both of these by clicking "Books" above.
View all posts by David N. Walker →
This entry was posted in Archives and tagged Blog, Christian, David N. Walker author, Duke University, Facebook, Life List Club, Myndi Shafer, Sherry Isaac, Twitter. Bookmark the permalink.