Care for the Elderly 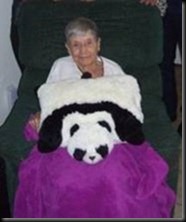 My mother and her beloved panda

This morning when I went to my 95 year-old mother’s assisted living home to visit her, she and a 90 year-old lady named Mamie and a new caregiver-in-training named Candy were sitting in the living room. Erica, the caregiver on duty who was training Candy, was in the bedroom of another lady, helping her with her morning preparations. The fourth resident, Fran, was still asleep.

Mamie was sitting by the doorway from the den to the entry hall, all dolled up to go out. I soon learned she had a doctor’s appointment and was awaiting her ride.

After I greeted and hugged Mother, I introduced myself to Candy, who turned out to be the daughter of one of the long-time caregivers I know well and like a lot. I was glad she was there and not too busy. Visiting with someone who asks every three minutes what I’ve been doing isn’t easy. It helps to have someone else to talk to also.

Mother started in on one of her favorite themes: she was hungry, and no one would give her anything to eat. Of course, she hadn’t been up from the breakfast table over an hour when I got there, but she doesn’t remember, and she’s sure no one has fed her. Candy assured me she’d had oatmeal and toast and had eaten every bit of it, along with two or three cups of coffee.

After a bit, Mamie asked Candy to get her lap blanket from her room. Candy asked her if she was cold, and Mamie said, “No, they haven’t told me anything.”

So it goes in the lives of these caregivers. This is not a big facility. It’s a house in a residential neighborhood, designed for a maximum of seven people and currently home to four. Candy’s presence was unusual. She was only there along with another caregiver because she was in training. Normally there is only one in attendance at a time.

One caregiver for four to seven people is an acceptable load most of the time, except when she’s got one resident in the bathroom (they all need help) and the doorbell rings. Or when they’re trying to wheel all of them to the dining table and the phone rings. At times like that, they can get pretty busy.

I’ve never asked one of these ladies—or their boss—how much they’re paid. It’s none of my business. But whatever it is, it’s not enough for the work they do and the love they give to these elderly people who frequently return their love with crotchety snapping. I try to reassure them as often as possible the we family members love them and appreciate all they do for our loved ones.

Have you had occasion to deal with a parent or other person in an assisted living or nursing home? What was your impression of the aides who did the scut work of caring for them?

David N. Walker is a Christian father and grandfather, a grounded pilot and a near-scratch golfer who had to give up the game because of shoulder problems. A graduate of Duke University, he spent 42 years as a health insurance agent. Most of that career was spent in Texas, but for a few years he traveled many other states. He started writing about 20 years ago, and has six unpublished novels to use as primers on how NOT to write fiction. Since his retirement from insurance a few years ago, he has devoted his time to helping Kristen Lamb start Warrior Writers’ Boot Camp and trying to learn to write a successful novel himself.

David N. Walker is a Christian husband, father and grandfather, a grounded pilot and a near-scratch golfer who had to give up the game because of shoulder problems. A graduate of Duke University, he spent 42 years in the health insurance industry, during which time he traveled much of the United States. He started writing about 20 years ago and has been a member and leader in several writers' groups. Christianity 101: The Simplified Christian Life, the devotional Heaven Sent and the novella series, Fancy, are now available in paperback and in Kindle and Nook formats, as well as through Smashwords and Kobo. See information about both of these by clicking "Books" above.
View all posts by David N. Walker →
This entry was posted in Archives and tagged Blog, Christian, David N. Walker author, Duke University, Facebook, Kristen Lamb, Twitter, Warrior Writer's Boot Camp, WWBC. Bookmark the permalink.

36 Responses to Care for the Elderly