The first time I saw Carol Underwood, I thought she was one of the most beautiful women I’d ever seen. She was a tall, willowy brunette, and I thought my cousin Randy Eiland had married above himself. Even in her sixties, shown here with her daughter Shawna, she was still a beautiful woman. 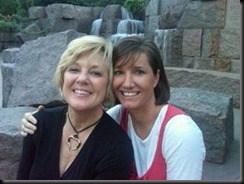 Carol and her daughter Shawna

All the years she was married to Randy and through the years since, she has maintained her beauty, both inside and out. She exercised all the social graces and always had nice words to say about everything. Although they’ve been divorced for a quarter of a century now, I’ve never heard her say anything bad about Randy.

They raised two kids—Shawna Eiland Gross and George Randolph (Shad) Eiland IV—and helped finish raising a niece when Randy’s sister’s marriage fell apart. Carol lived her life in Lamesa surrounded by Randy (and my) family and was always a gracious and fun part of family gatherings.

After their divorce, she left the West Texas farm town of Lamesa where they had lived and moved to Dallas. Following an interest she’d always had in interior decorating, she entered that highly competitive business as a salesperson for Stark Carpet Corp. She successfully made a career for herself there even though she was around forty when she began.

At my age, you’re not too surprised to hear that a contemporary has passed on, but Carol would have been about the last one we would expect to see go. She was very slender and always kept in shape.

Unfortunately, she fell down the staircase in her apartment. Her son Shad was visiting and rushed her to the emergency room, where it was determined her only injury was a big goose egg on the back of her head. The fatal heart attack occurred a couple of days later. All we can figure is that the fall must have caused a little clot to form and work its way to her heart.

Be careful even of little injuries. It doesn’t take too much to cause a blood clot to form, and once it does, it can cause irreparable damage to the heart or lungs or brain if it should migrate to one of those places.

Life is a fleeting thing. Don’t take it for granted. God gives us no guarantee of tomorrow. Make the most of today—everyday.

David N. Walker is a Christian father and grandfather, a grounded pilot and a near-scratch golfer who had to give up the game because of shoulder problems. A graduate of Duke University, he spent 42 years as a health insurance agent. Most of that career was spent in Texas, but for a few years he traveled many other states. He started writing about 20 years ago, and has six unpublished novels to use as primers on how NOT to write fiction. Since his retirement from insurance a few years ago, he has devoted his time to helping Kristen Lamb start Warrior Writers’ Boot Camp and trying to learn to write a successful novel himself.

David N. Walker is a Christian husband, father and grandfather, a grounded pilot and a near-scratch golfer who had to give up the game because of shoulder problems. A graduate of Duke University, he spent 42 years in the health insurance industry, during which time he traveled much of the United States. He started writing about 20 years ago and has been a member and leader in several writers' groups. Christianity 101: The Simplified Christian Life, the devotional Heaven Sent and the novella series, Fancy, are now available in paperback and in Kindle and Nook formats, as well as through Smashwords and Kobo. See information about both of these by clicking "Books" above.
View all posts by David N. Walker →
This entry was posted in Archives and tagged Blog, Carol Underwood Eliand, Christian, David N. Walker author, Duke University, Facebook, George Randolph Eiland, heart attack, Kristen Lamb, Randy Eiland, Shad Eiland, Shawna Eiland Gross, Twitter, Warrior Writer's Boot Camp, WWBC. Bookmark the permalink.