My guest blog today is provided by Janice Hardy, a multi-published author who blogs at http://blog.janicehardy.com/. After you read her post here, skip over to her site to read my post “A Tale of Two Writers.” You might learn some things to do and not to do to develop as a writer.

There’s a great quote by Sun Tzu: “Live with a Man for 40 years, eat with him, talk on every subject. Then take him to the edge of a cliff and push him over – only then will you truly know the man.”

This is how I feel about my characters.

I prefer to throw them into rough situations and force them to make hard choices. As I see what they do, I learn more about them and who they really are.

When I first started writing Nya, the protagonists in my teen fantasy series The Healing Wars, all I really knew about her was that she:

I also knew from a plot standpoint that all of these things brought her trouble in some way.

As I wrote The Shifter (book one), I got to learn about the kind of person she was. Fiercely loyal to her sister, the only family she had left. Kind-hearted and willing to help others even at risk to herself. Quick-thinking and resourceful. But she also had her flaws (she’d be a boring character without them, right?). A bit judgmental. Impulsive, especially when it came to her family. And a little bigoted about the enemy soldiers currently occupying her city.

None of these traits were planned beforehand. They all revealed themselves as I wrote the first draft of the book. I discovered Nya’s good heart when she healed a boy trying to help arrest her for stealing food to survive. She didn’t think he was a bad person, just someone stuck in a bad situation trying to do the best they could, just like she was. This boy was first written as a man, and a throwaway character at that. But Nya’s attitude toward him changed his character, and he ended up becoming one of the major characters in the series (and a love interest for her).

I couldn’t really tell you where her attitude in that scene came from. My subconscious does most of the work when I’m actually writing (as compared to my brain when I’m plotting and planning a book). The words flow and I don’t always know what’s going to wind up on the page. Especially when it comes to what a character will think or do. I just don’t know until I get there and see them in the situation.

By the time I got to Darkfall (book three), I knew Nya pretty well. You’d think that would have made her boring to write, but it was even more interesting to see what she’d do. I knew where her pressure points were, what made her fly off the handle and react badly, so I could really heap the stress on her. I could push her over that cliff and finally, truly know her.

And she surprised me.

She crossed lines I never expected her to cross. Dug in her heels when I thought she’d charge ahead. She’d grown as I’d written her, learning about herself as well as teaching me about who she was. Past mistakes made her more cautious, more determined, more thoughtful. She was still Nya, still charging in without thinking, but her reactions had evolved by what she’d been through.

It was a fascinating process, and a lot of fun to write. To see a character I knew so well become something more. I may have pushed her off a cliff, but she was the one who told me she could fly.

Janice Hardy always wondered about the darker side of healing. For her fantasy trilogy THE HEALING WARS, she tapped into her own dark side to create a world where healing was dangerous, and those with the best intentions often made the worst choices. Her books include THE SHIFTER, BLUE FIRE, and DARKFALL from Balzer+Bray/Harper Collins. You can visit her online at www.janicehardy.com or chat with her about writing on her blog The Other Side of the Story, http://blog.janicehardy.com/ 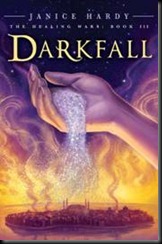 War has come.
Nya’s the one who brought it. And the people love her for it.
With Baseer in shambles and Geveg now an impenetrable military stronghold, Nya and the Underground have fled to a safer location—without Tali. Nya is guilt-ridden over leaving her sister behind and vows to find her, but with the rebellion in full swing and refugees flooding the Three Territories, she fears she never will.
The Duke, desperate to reclaim the throne as his own, has rallied his powerful army. And they are on the move, destroying anyone who gets in the way.
To save her sister, her family, and her people, Nya needs to stay ahead of the Duke’s army and find a way to build one of her own. Past hurts must be healed, past wrongs must be righted, and Nya must decide: Is she merely a pawn in the rebellion, a symbol of hope—or is she ready to be a hero?

David N. Walker is a Christian husband, father and grandfather, a grounded pilot and a near-scratch golfer who had to give up the game because of shoulder problems. A graduate of Duke University, he spent 42 years in the health insurance industry, during which time he traveled much of the United States. He started writing about 20 years ago and has been a member and leader in several writers' groups. Christianity 101: The Simplified Christian Life, the devotional Heaven Sent and the novella series, Fancy, are now available in paperback and in Kindle and Nook formats, as well as through Smashwords and Kobo. See information about both of these by clicking "Books" above.
View all posts by David N. Walker →
This entry was posted in Archives and tagged Blog, Dark Fall, David N. Walker author, Facebook, Janice Hardy, The Healing Wars, The Shifter, Twitter, Warrior Writer's Boot Camp, WWBC. Bookmark the permalink.

1 Response to Trial by Fire