My maternal grandmother—Mimi to us grandkids—was a very important part of my childhood. She lived in the town of Munday, Texas, 140 miles west of Fort Worth, so we visited frequently as a family, and I almost always spent a week with her in the summer. 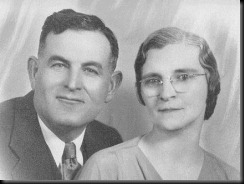 When I was very young, she and my Gampaws lived in the house my mother grew up in. It seemed ancient to me, with its back porch cistern and its bathtub up on feet.

My only memories of him were at the dinner table and lying on his bed. He died just after I turned three, and his health kept him practically bedfast.

Mimi was always busy. My mother told me she came home from school one day to see her mother sitting in a chair. She was scared, because she’d never seen her mother sitting down during the day before. That’s the way she was. Forever working on something.

KFC wishes they could make fried chicken like she did. I can still salivate just thinking about it. And homemade rolls or biscuits . . . she made them for just about every meal. Mmmm . . .

The old house had a telephone on the dining room wall. You’d take down the earpiece and speak into the mouthpiece, which was mounted on the phone box. There was a little crank you’d turn to get the operator. She’d come on the line and place your call for you. If your party wasn’t at home, the operator usually knew that and would tell you where he or she was instead of placing the call. 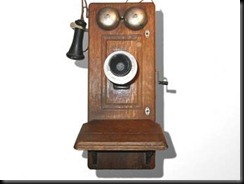 Mimi had a sandbox in her backyard for us kids to play in. Trouble was, it sat under a mulberry tree. Most of the time the sand was covered with messy mulberries.

She also had a storm cellar in the backyard. It doubled as a storage place for the jellies, jams and other things she canned, but by the time I came along, she’d pretty much given that up. Mother says she hated that cellar, because “Every time two clouds appeared at the same time, Dad would make us all go down there.”

Mimi built her “new” house in 1950. My dad always said it had rubber walls, because she kept half a dozen or so rollaway beds for people to sleep on when we all came for Christmas, in addition to the extra twin bed in her bedroom and the double bed in the guest room. Of course, we kids piled on the floor in the den.

She kept a toy closet in the den for us. There were several shelves of toys to play with, but the real treasure was an old trunk at the back of the closet. It was filled with old clothes—both male and female—that we used to play dress-up. Lots of fun.

When I visited in the summer, I always had her to myself. My little sister and brother each had cousins close to their ages, so they never had solo visits with her. She would take me to the drive-in movie. After the drive-in, we’d stop at the Sugar Shack for an ice cream treat or a super dog. I loved super dogs. They’re like corn dogs but made with flour instead of corn. Hard to find anywhere these days.

Although, as I mentioned, she was an excellent cook, she loved to eat out and would always take me to the City Grill once or twice, where I’d usually have chicken fried steak. We’d also stop by the drug store my granddad and his brother built. They’d sold it to a family friend years before I was born, but he always treated us as if our family still owned it. He had the best hand-packed ice cream on the planet. I’ve never tasted ice cream like that since then—even at the Blue Bell Creamery.

The worst part of visiting Mimi was that she’d always drag me around to visit some of her friends. As a grandparent now, I can understand the pride of introducing your grandkids to your friends, but back then it was just a royal pain.

Mimi lived to be nearly 98, but her last several years involved lying inert in a bed in a nursing home. I know the grandmother I knew and loved was somewhere back in that body, but what I could see when I visited her bore little resemblance to the warm, wonderful woman I remembered.

Ø Who are some of your unforgettable characters?

Ø How have some or all of these people affected your life?

A graduate of Duke University, I spent 42 years as a health insurance agent. Most of my career was spent in Texas, but for a few years I traveled many other states. I started writing about 20 years ago, and have six unpublished novels to use as primers on how NOT to write fiction. Since my retirement from insurance a few years ago, I have devoted my time to helping Kristen Lamb start Warrior Writers’ Boot Camp and trying to learn to write a successful novel myself.

David N. Walker is a Christian husband, father and grandfather, a grounded pilot and a near-scratch golfer who had to give up the game because of shoulder problems. A graduate of Duke University, he spent 42 years in the health insurance industry, during which time he traveled much of the United States. He started writing about 20 years ago and has been a member and leader in several writers' groups. Christianity 101: The Simplified Christian Life, the devotional Heaven Sent and the novella series, Fancy, are now available in paperback and in Kindle and Nook formats, as well as through Smashwords and Kobo. See information about both of these by clicking "Books" above.
View all posts by David N. Walker →
This entry was posted in Archives and tagged Blog, crank telephones, David N. Walker author, Facebook, grandmother, Munday, old telephones, party lines, remembrances, sandbox, storm cellar, Sugar Shack, super dogs, Twitter, Warrior Writer's Boot Camp, WWBC. Bookmark the permalink.