We’ve all been to wonderful places that bring memories flooding back to us. Places of awesome beauty, like the Canadian Rockies. Places of great excitement like the Grand Ole Opry. Even a quiet spot under a tree at Grandma’s house. Here’s one of the places I remember from my own past.

As we headed for the restaurant, I didn’t expect much. After all, we were in a small town on I-84 in northeastern Oregon with little reason to be of any importance.

It had been a good day. Leaving my sister’s condominium in south Spokane, we discovered some delightful views from South Hatch Street as we dropped down from a higher elevation into the valley where U.S. 195 ran.

Most of the drive from there to Lewiston, Idaho, traverses gently rolling farmland, but a startling change occurs just before we got to Lewiston. U.S. 195, feeds into U.S. 95, which begins a dramatic descent into the valley of the Snake River, where the twin cities of Lewiston, Idaho, and Clarkston, Washington, are located.

Due to a late start from my sister’s, we were ready for lunch about that time. We found a nice city park in Clarkston on the riverbank.

You’ve gotta understand how it is back home for us Texans. Most rivers are either dried up arroyos or small, feeble streams. Our major rivers are a muddy brown with a flow rate of maybe a mile a day. When we see a clear mountain creek or river or one that flows rapidly, we get all excited.

The Snake at this point is both. I don’t remember if it’s as clear as a little mountain stream, but it’s definitely clearer than what we see at home, and it definitely flows. I’m sure it has many times more daily flow of water than the Trinity around Fort Worth. We loved sitting in the motorhome and watching the river go by as we ate.

Leaving Clarkston on S.H. 129, we paralleled the river as it separated the two cities and their states. Once away from town, we began a climb of heroic degree. Within sight of town we went from the river level of around 1200 to 1300 feet to over 3000 feet, and a few miles farther along we topped out over 4000 feet. I was afraid our gasoline-powered engine might overheat, but it didn’t—quite.

We spent the next couple of hours climbing and descending big grades as we drove through an almost primitive area of southeastern Washington and northeastern Oregon. My engine heat indicator would move over toward the redline as we climbed and then make a swift move back toward cold as we coasted down. A bit taxing on both the engine and the driver, not to mention the brakes, which had to keep the motorhome and our tow car under control on the downhill parts.

The country we passed through exhibited an unbelievable beauty. No wild vistas of distant mountains. We traversed a canyon that occasionally opened into a little valley, with the other side of the canyon rising too high to afford any long distance view—but the canyon itself was magnificent.

The area seemed almost unchanged since the days of the pioneers. I doubt if we met more than half a dozen vehicles during the entire 85-mile trip from Clarkston to Enterprise, Oregon. The terrain leveled out as we neared Enterprise, and the rest of the trip to La Grange was nice, but the spectacular scenery was behind us. 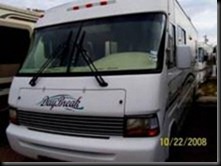 Pulling into the RV park at La Grange, I asked the lady in the office for the name of a good restaurant for supper. I told her I was in the mood for a steak, and she told me I had to try Ten Depot Street. The name also turned out to be the address, which she pointed out to us on a little map of the town.

The exterior of the building was unassuming, and the interior, homey and comfortable. I ordered prime rib with baked potato and salad. I told the waitress I wanted the rarest piece in the kitchen. My mouth can hardly stand to have anything dry in it. Whether it’s pancakes with a little raw batter left in the center, brownies a little moist in the middle or extra rare steaks, I want my food moist.

The slab of prime rib the waitress served me was such a bright red I wanted to jump up and hug her. It fairly melted in my mouth. I’ve had a lot of good prime ribs in a lot of different restaurants—some very fancy and high-priced—but none ever any better than in the small restaurant in this small Oregon town. If I’m ever anywhere near there again, I’d probably drive 100 miles out of the way to eat there.

Ø Do you remember and think about restaurants where you’ve eaten in faraway places?

David N. Walker is a Christian husband, father and grandfather, a grounded pilot and a near-scratch golfer who had to give up the game because of shoulder problems. A graduate of Duke University, he spent 42 years in the health insurance industry, during which time he traveled much of the United States. He started writing about 20 years ago and has been a member and leader in several writers' groups. Christianity 101: The Simplified Christian Life, the devotional Heaven Sent and the novella series, Fancy, are now available in paperback and in Kindle and Nook formats, as well as through Smashwords and Kobo. See information about both of these by clicking "Books" above.
View all posts by David N. Walker →
This entry was posted in Archives and tagged Blog, Clarkston, David N. Walker author, Facebook, Idaho, La Grande, Lewiston, Oregon, remembrances, Snake River, Spokane, steakhouses, steaks, Ten Depot Street, Twitter, Warrior Writer's Boot Camp, Washington, WWBC. Bookmark the permalink.