We’ve all been to wonderful places that bring memories flooding back to us. Places of awesome beauty, like the Canadian Rockies. Places of great excitement like the Grand Ole Opry. Even a quiet spot under a tree at Grandma’s house. Here’s one of the places I remember from my own past.

In an earlier blog, I wrote about going to Capulin Mountain, a volcano between Clayton and Raton, New Mexico, and going down into the crater. That was just the beginning of that vacation. 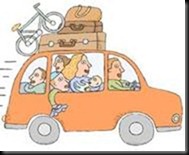 The year was 1951, and I was only eight years old—an age at which small things made great impressions on me. When we left there, we drove to Raton, stopping at a Safeway to buy groceries for a picnic. That was a win-win, since it was cheaper for the parents than a restaurant would have been, and we kids were excited at the idea of eating outdoors in an strange new place.

The only thing I remember about the picnic itself was that either Judy or Louise Truelson bought a can of sardines. I’d never heard of them before, so I had to get a close-up look, practically sticking my nose into the can. I was so grossed out by seeing and smelling those things I didn’t need to taste one. I’ve never wanted one in the 60 years since then, either.

After we finished our picnic, we got back into our cars. Most of the time John and I rode together in one car, while Judith Ann and my sister Barb rode in the other, but I remember being in our car this particular time, because my mother was telling us about her experiences going over Raton Pass as a little girl.

She said it was a much more exciting—read dangerous—deal back then than at this time. I remember thinking the narrow, steep road ahead of us was exciting enough.

As we climbed toward the pass, I noticed something strange over on the other side of the road, where vehicles were descending from the pass. It was a strip of unpaved road that led nowhere.

I asked what that was for. I don’t know whether I saw the sign and read it or not. I’m sure at that age I could have read it, but that wouldn’t have explained its function.

As my dad explained that if a truck going down the mountain wore out its brakes and couldn’t stop, the driver could go straight up the ramp instead of taking the curve in the road. The ramp was designed to stop the truck so it wouldn’t cause an accident.

That sent my eight year-old imagination into all sorts of fantasies. I wanted to see a truck use it—or one of the many other such ramps we saw later on the trip. Thank God we didn’t see such a thing, and I’ve never seen one actually used in all the years since, but I had great visions of it at the time.

Ø What are some of the places you remember from childhood—or maybe from last year?

Ø What strange or unusual sights did you encounter?

David N. Walker is a Christian husband, father and grandfather, a grounded pilot and a near-scratch golfer who had to give up the game because of shoulder problems. A graduate of Duke University, he spent 42 years in the health insurance industry, during which time he traveled much of the United States. He started writing about 20 years ago and has been a member and leader in several writers' groups. Christianity 101: The Simplified Christian Life, the devotional Heaven Sent and the novella series, Fancy, are now available in paperback and in Kindle and Nook formats, as well as through Smashwords and Kobo. See information about both of these by clicking "Books" above.
View all posts by David N. Walker →
This entry was posted in Archives and tagged Blog, Clayton, David N. Walker author, Facebook, New Mexico, Raton, Raton Pass, remembrances, runaway truck ramps, Twitter, Warrior Writer's Boot Camp, WWBC. Bookmark the permalink.