It amazes me sometimes to think about the things we take for granted in today’s world. We talk, text or email people around the world from a little device we carry in our pockets. We scroll through hundreds of channels looking for a show to watch on television. Or to DVR so we can watch it later.

My maternal grandmother—we called her Mimi—lived in the thriving city of Munday, Texas. No, spell-check, I did not misspell it. It does have a “u.” 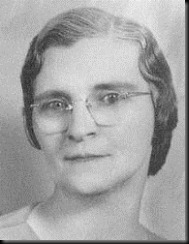 Growing up, I always visited Mimi for a week or so in the summer. Bear in mind this was in the late 1940s and early 1950s, and there was no air conditioning in public buildings. The new house she had built in 1950 was air conditioned, but this was a rarity at the time, and any time we left the house we sweltered.

Mimi loved to take me around town to show me her friends and to run errands, and I always suffered when I went with her. Car, drug store, department store, other people’s homes—everywhere we went we sweltered. She must have felt it even worse than I did, since she always dressed like she was going to church. Shorts were unthinkable, and she never even wore slacks or jeans.

All of this is why I loved Atkinson’s Grocery Store. No, it wasn’t air conditioned either, but it had a meat locker. Unlike Harry Snyder’s grocery store where my mother shopped in Fort Worth, their meat locker was accessible to the public. Mr. Snyder’s was back behind the butcher counter, like those in most grocery stores of the time, but I could actually walk into this one at Atkinson’s, and doing so became my normal routine.

I have no idea what the actual temperature was inside the locker. It must have been above 32 degrees, because the meat didn’t freeze, but it was plenty cold in there. I’d stay until I couldn’t stand the cold any more and then go out to join Mimi, but if it took her very long to finish her shopping I’d be back in the meat locker.

We didn’t have all the comforts and gadgets of today’s world, but we found ways to make do.

Ø Think of your early childhood—what things would blow your children’s or grandchildren’s minds compared to their lives today?

Ø How did some of these things from childhood mold your development?

David N. Walker is a Christian husband, father and grandfather, a grounded pilot and a near-scratch golfer who had to give up the game because of shoulder problems. A graduate of Duke University, he spent 42 years in the health insurance industry, during which time he traveled much of the United States. He started writing about 20 years ago and has been a member and leader in several writers' groups. Christianity 101: The Simplified Christian Life, the devotional Heaven Sent and the novella series, Fancy, are now available in paperback and in Kindle and Nook formats, as well as through Smashwords and Kobo. See information about both of these by clicking "Books" above.
View all posts by David N. Walker →
This entry was posted in Archives and tagged Blog, David N. Walker author, Facebook, grocery store, meat locker, Munday, remembrances, Texas, Twitter, Warrior Writer's Boot Camp, WWBC. Bookmark the permalink.

5 Responses to The Meat Locker