Have you ever wondered at the complete insanity of our traffic laws? Does it seem like they are primarily designed to keep anyone from ever getting anywhere?

We all acknowledge that we need to conserve motor fuel to keep from running out of petroleum. Whether that possibility is within our lifetimes or sometime after our great-grandchildren’s children are gone, it will happen some day.

Most of us also agree that we should do what we can within reason to lessen pollution added to our atmosphere by internal combustion engines. I don’t hug trees or advocate driving tiny little cars people can’t fit in, but I do think we should take reasonable action to reduce these emissions.

The answer to both questions is obvious. Stopping, idling and accelerating add greatly to both pollution and fuel consumption.

Before someone accuses me of being a perfect idiot (actually no one is perfect), I realize that sharing a metropolitan area with over six million other people necessitates some traffic interruptions. If I want to be able to get around town without dealing with stop signs and traffic lights, I need to move to Gail, Texas, or Gotebo, Oklahoma, or maybe to some remote rural spot in Nevada. Actually, that sounds pretty good, but my wife’s a city girl.

Okay, there are intersections that require stopping someone sometime in order for traffic to proceed safely. We’ll have to keep putting up with that. But let’s try to be reasonable about it.

Make a mental note next time you head out for work or the grocery store or wherever: how many times are you forced to stop unnecessarily or forced to wait unnecessarily once you have stopped? 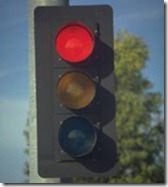 Granbury Road is a semi-major street in my neighborhood. Bilglade is a neighborhood street which crosses it in an area where it is rarely very busy, but there is a traffic light at that intersection that works 24/7. There may be enough traffic during morning and evening rush hours to justify a light there. I don’t know, but let’s concede that need for maybe four hours a day. The other 20 hours a day, a car on Bilglade trying to cross the intersection will wait interminably with NO ONE going by in either direction.

South Hulen is a busier street in my neighborhood. At its intersection with Wrigley Way there is a light which stops a fairly heavy flow of traffic on Hulen in order to allow no one on the empty cross street to pass. Since there is a school there, there may be an actual need for a light for an hour each morning and again each afternoon to accommodate school traffic, but that leaves 22 hours daily when it should not be in operation.

When I started driving back in the 1950s, Camp Bowie Boulevard was one of the major busy streets in Fort Worth. There were numerous traffic lights up and down the street, but even as major as it was, all the lights switched to blinking yellow at midnight, with blinking red for the side streets. Can our traffic engineers not figure out how to do that these days? Have we retrogressed?

We live on the corner where a two-block long street crosses a through street. Traffic on the through street has a stop sign, while the few cars using the minor street cruise by. Make sense out of that.

Clayton Road is a major neighborhood street on the west side of Fort Worth. It carries a high volume of traffic and should have the right-of-way over every street it crosses. So the city, in its great wisdom, has put up eight or 10 stop signs to halt the flow of traffic. Fuel efficient? Eco-friendly?

In the last decade or so we’ve come up with another wonderful deterrent to the flow of traffic: speed bumps. Oh, excuse me—speed humps. I guess calling them that is supposed to make them less intrusive. There’s no telling how many millions of dollars the city of Fort Worth has spent installing these obstructions. Your city has probably been doing likewise. Now we can not only use more fuel and emit more pollutants from slowing down and speeding up, we can also buy more tires and shock absorbers. A brilliant use of taxpayer money to disrupt the orderly flow of traffic.

The next few times you get in your car, note how many stop signs shouldn’t be there. How many are turned the wrong way. How many traffic lights either shouldn’t be there or else should only operate a few hours a day. How many speed bumps jar you as you navigate your way through neighborhoods. Then ask yourself a few questions:

Ø How do you feel having to park at a red light while no traffic—or almost none—goes by on the intersecting road?

Ø How do you feel about having to stop for stop sign when the road you’re on is obviously the through street?

Ø How do you feel about jarring yourself, your passengers and your vehicle going over speed bumps as you try to drive down the street?

Ø Try to imagine how many gallons of fuel are absolutely wasted every day by the millions of vehicles around the county slowing down, stopping, waiting and accelerating from UNNECESSARY stops.

Ø Try to imagine how many tons of pollutants are released into the atmosphere each day by this foolishness.

We should all demand that our municipal governments make the following changes:

1. Remove ALL speed bumps from our streets.

2. Turn ALL stop signs to halt the side streets and not the main streets.

3. Except for truly busy intersections, time all traffic lights to flash yellow for the major street and red for the side street except during rush hours—or when kids are on their way to and from school when applicable.

David N. Walker is a Christian husband, father and grandfather, a grounded pilot and a near-scratch golfer who had to give up the game because of shoulder problems. A graduate of Duke University, he spent 42 years in the health insurance industry, during which time he traveled much of the United States. He started writing about 20 years ago and has been a member and leader in several writers' groups. Christianity 101: The Simplified Christian Life, the devotional Heaven Sent and the novella series, Fancy, are now available in paperback and in Kindle and Nook formats, as well as through Smashwords and Kobo. See information about both of these by clicking "Books" above.
View all posts by David N. Walker →
This entry was posted in Archives and tagged Blog, municipal government, municipalities, traffic, traffic control. Bookmark the permalink.